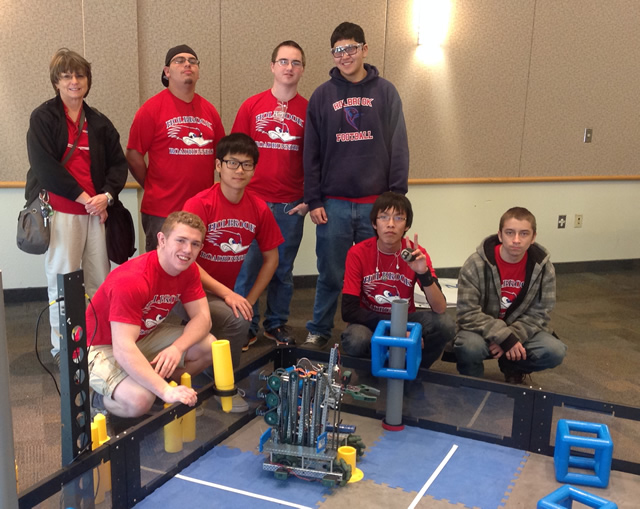 Check us out as a model team on REC Facebook page.

“Programming or engineering in your future? Then think robotics today.” That is what 9 Holbrook High School students are doing. With a grant from the Microchip Corporation and the Robotics Education and Competition Foundation and support from CTE and STEM projects at HUSD#3, these students competed in Vex Robotics qualifying events around the state--Kearny, Mesa, and Prescott where we earned the top Vex award of the best overall team of the day--the excellence award qualified as a team for state and the US Open Vex Tournament.

There is a total of 201 VEX teams in the state. 136 of them are VRC teams, 6 are VEX U, and 59 are VEX IQ. There are 102 high school teams in the state. Arizona is (as of this morning) ranked #12 for the nation's largest VEX programs (all three programs together). We grew 62% last season and will have at least that much this season.

We got 18 out of 35, our first time there, in Arizona State SkillsUSA Challenge which included an interview and PowerPoint presentation, engineering journal, safety, resume, and math test and a new problem to build and program a robot for which was a change at halfway. It also had a full minute autonomous program which worked well. We got the highest score on the math test and was above average in four other areas. James Sumpter was the driver and Joseph Holl was the programmer.

VEX Skyrise is played on a 12’x12’ square field configured as seen above. Two alliances – one “red” and one “blue” – composed of two teams each, compete in matches consisting of a fifteen-second autonomous period followed by one minute and forty-five seconds of driver-controlled play.

The object of the game is to attain a higher score than the opposing Alliance by Scoring your colored Cubes in Floor Goals, on Posts or on your Skyrise, by Owning Posts, and by building your Skyrise Sections.

Each Robot (smaller than 18”x18”x18” to start) begins a match on one of their Alliance Starting Tiles. There are ten (10) Posts and four (4) Floor Goals that Robots can Score Objects onto. The Alliance with the topmost Cube on a Post Owns the Post. Alliances also earn points for Building Skyrises on their Skyrise Base out of Skyrise Sections and Scoring Cubes on Skyrises. A bonus is awarded to the Alliance that has the most total points at the end of the Autonomous Period.

The team competed at competing at the Ray High School qualifying event at Kearny, AZ getting 2nd on the day and bringing home the sportsmanship trophy. They also competed at the EVIT Expo Qualifying event and got to the semi-finals by being chosen by the top team of the day as a partner. They again received the sportsmanship trophy for the positive team to team interaction, talking to the judges and resetting the field after every match they participated in. For the first time, Northern Schools will have a competition at Prescott on January 31.

As a mixed level team, they are already thinking about next year. It is a junior/senior-level program at Holbrook High with some NPC dual credit available. The sophomore-level robots are the Lego Mindstorm robots programmed using NXT software and introducing Vex Robotics through Virtual World.